Review: "Lady Vernon and Her Daughter" 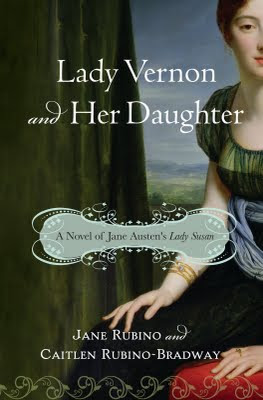 One of Austen’s earlier novels, not published until well after her lifetime, gets an expanded treatment in this novel. Lady Susan, an epistolary novel written in 1794 but published in 1871, is a short work begging for an expansion into prose territory, and authors Rubino and Rubino-Bradway both have done suitable jobs adapting the letters to create a larger story while managing the tricky task of keeping Austen’s town.

Lady Vernon and Her Daughter follows the titular characters (Lady Susan Vernon and her daughter Frederica Vernon) from before Lady Susan’s marriage to her adult daughter’s marriage, starting before Austen’s original work and following through to where it ended. Important details are added to flesh out not only the Vernons but the extended family. Particular attention is given to Charles Vernon and his relationship with his deceased brother Frederick, which comes to influence his decisions to help or hinder Lady Susan in her endeavors. The mysterious Mrs. Johnson, Lady Susan’s mysterious confidant, appears in the flesh, and Lady Susan is given new motives that would not make it onto paper. This book includes some of the original letters from Austen’s novel, though altered to fit the book, and the ending is more sympathetic to its female leads.

This solid rethinking of Lady Susan deserves a place on the shelf of any Austen aficionado.
Posted by Marsha Altman at 1:56 PM No comments:

I made Publisher's Weekly!

The Plight of the Darcy Brothers
Marsha Altman. Sourcebooks, $14.99 (368p) ISBN 9781402224294
In her second Pride and Prejudice sequel, Altman brings back the Darcys and the Bingleys, offering up a charming tale of family and intrigue, along with a deft bit of comedy. When proper Bennet sister Mary returns from the continent, she is a compromised woman. Darcy and Elizabeth go to the continent to find the father and convince him to do the right thing, but on the way, they discover secret scandals about the Darcy family, including one half-brother Darcy didn’t know about and a bigger problem that could ruin the entire family’s reputation. Altman follows a well-tread path with this sequel to Austen’s classic, and Austen fans will be pleased with the treatment of her characters. Though the ending feels rushed, Altman takes the spirit of the original runs with it to mostly deliver on fans’ great expectations. (Aug.)

Book 2, The Plight of the Darcy Brothers, is officially on sale despite the August 1st publication date. Some bookstores may hold out until the pub date, but for the most part it's in stores and selling on the internet. My main page doesn't reflect this much because it's under construction and I haven't altered it.

Books 2 and 3 are now both available for pre-order on Amazon.com

The Plight of the Darcy Brothers (August 2009)

Book 1 is availabe on Kindle!

If you want to review book 2 and you have a review blog of some sort, shoot me an email and I will try to nab you a review copy.
Posted by Marsha Altman at 2:22 PM No comments:

Review from "Church of Nu-Topia"

The Darcys and the Bingleys, Marsha Altman

I had read this on the ride home from Lunacon, hoping it would serve as a palate cleanser for Twilight. While it was certainly funny in a way Twilight could never be (ie deliberately), with a few genuine laugh-out-loud moments, I was fairly disappointed.

In which I recount the ways Darcy is transformed into someone else.

This book starts several days before the Bennet sisters' double-wedding. Usually, the P&P sequels start the day of or the day after the wedding, and only show the days leading up to the ceremony as a reminiscence if they're shown at all. However, the chapter opens with Bingley trying to ask Darcy for advice--which, on its own, is not terribly surprising. However, what Bingley's looking for is advice about sex, as he doesn't want to disappoint Jane. While I thought Darcy's initial reaction was fairly apt (ignoring the moderately unlikely premise that Bingley would ask him about that in the first place) with him getting all stuffy, his secondary reaction fell a little short of the mark. He races off to London to purchase Charles a copy of a sex manual translated from India. Now, the back cover calls it the Kama Sutra, but that’s a publisher’s error, not the author’s. You can go back and check the text; nowhere does she specify that it is the Kama Sutra. However, the Ananga Ranga makes an appearance later on, which won't be translated and printed until '85, but everyone seems to be pig-piling on a mistake that was not Altman’s.

Chapter One ends with Bingley getting ready to tell a story about a party he and Darcy attended back when they went to Cambridge together. However, instead of just telling the story, Chapter Two opens with the date: 1795. I can't explain how much that annoyed me. It's like on fanfiction.net when people use ==Darcy's POV== to indicate a point of view switch (which, I was not-entirely-surprised to discover was a more apt comparison than I'd assumed at the time, but I'll get to that). If I can't tell that you've switched POV's without you announcing it and interrupting the flow of your story, YOU HAVE PROBLEMS. Anyway, I felt that the entire sequence was clumsily handled. At other points, she has characters remembering things they had done previously without too much of a problem; but then other times she'd feel the need to cut to a flashback. In this flashback, we see what will be a common theme throughout the book: Darcy's inability to handle alcohol. Just for ha-ha's, I started keeping track of how many times Darcy was depicted as drunk. I gave up after five, cause I just didn't want to know any more. It was like trying to count the number of times 'perfect,' 'angel[ic],' or 'dazzling' was used in Sorry, forgot, saving my snark for my review of that book--although I bet you could guess what book I was gonna say, couldn't you?

After that flashback, we skip forward to page 93 and Darcy pitching Wickham out a second story window into a pile of manure (why there was a manure pile up next to the manor is beyond my guess). And all this before the wedding!

I could go on and on, but there are a few things that Altman got right, and I feel she deserves credit for them. As OOC as she had Darcy acting, she certainly got his voice down. Elizabeth's, too, as well as the tenor of their relationship. Oh, and also Mr. Bennet's. Basically, she made sure there was enough Austen-ian wit in there to keep me amused. As I said, there were some perfectly lovely lines in the book:

[After Darcy has related a story about (drunkenly!) punching Wickham in the face in university over a nickname]: "So, you are saying that if I call you 'Fitzers,' you will strike you wife?"
"No, of course not. I will politely say in a very respectful and quiet voice, 'Dearest Lizzy, love of my life, if you call me that again, I will have no recourse but to annul our marriage and send you to a nunnery in Ireland.'"

and: "I say, my daughters seem to be in some kind of competition. The first husband I must pay; the second I have no obligations to; and the third pays me. Mary, if this pattern is to continue, I will consent to you marrying a man of no less than twenty thousand pounds a year. And Kitty, nothing less than royalty will do. I perhaps will settle for Scottish royalty, but only if he truly loves you."

She also has Elizabeth continue to call her husband 'Darcy' after the wedding. This is purely a personal thing, but I prefer 'Darcy' to 'Fitzwilliam.' Fitzwilliam is just too long, doesn't break down into nicknames very well, and lacks the feeling of romance. I mean, it's easy to say, "Oh, Darcy." But, "Oh, Fitzwilliam"? I don't think so. Go ahead, say it. Okay, now try it again without Fitzwilliam sounding stupid. Ha! I told you.

The second quarter of the book passes fairly uneventfully (wedded bliss, believable voice, Darcy gets drunk, Jane and Lizzy breed, etc etc), until Charles is called away to give his consent to Caroline's soon-to-be-fiance. Uneasy with the man and unsure why, Bingley sends for Darcy, and they play private eye in London. Grumpy about being left out of the action, Lizzy convinces her father to go on an excursion to Scotland (the prospective groom's homeland) to do a little digging of her own. Of course, the man turns out to be a blackguard; there's a thrilling scene where Darcy is nearly murdered, saved at the last minute by Bingley and Elizabeth who somehow manage to sneak into the guy's lodgings, I don't even know anymore; and Caroline Bingley ends up marrying a doctor--the same doctor who has been called in to treat Mr. Hurst's gout.

Caroline Bingley marries a man in trade. True, he was born into a respectable family, but his elder brother wasted the estate on gambling and drink (Darcy, are you paying attention?!) and so now he has to work to support himself. Clearly, Darcy isn't the only one who got tapped by the OOC-fairy. And, it turns out, underneath her cold and bitchy exterior, is the heart of a warm and kind woman. Or something.

And then everyone gets locked into their rooms at Pemberley while the blackguard and the doctor's brother team up to exact revenge, and the book ends with Darcy getting drunk.

All that nonsense aside, this book is actually going to get a decent grade. It amused me, which was its main purpose, and, like I said, Altman somehow manages to get the characters completely right even as she gets them completely wrong. It's a fast read, and would be a decent book with (some better editing) and her own Regency characters. I believe a lot of my harshness stemmed from (what I saw as) the juxtaposition between their nigh-perfect voices and their OOC actions. I do find it telling that this book has its origins on fanfiction.net, which I discovered at the end of the book. I'm not saying that to be impugn it or the author (hell, I'm on ff.net), but it clarified why I had certain problems with the book. She makes a lot of the same mistakes that fanfic authors often do (painful transitions, inserting drama for drama's own sake, OOC characters...).

Of the two, that was the better book.
Posted by Marsha Altman at 4:10 PM 1 comment:

Picking up right where Pride and Prejudice left off, Altman’s debut novel commences just two days before the double wedding of Darcy and Bingley to the Bennett sisters. When Bingley confides some misgivings about the upcoming wedding night, Darcy presents him with a special wedding gift: a magnificently illustrated edition of The Kama Sutra. This light, humorous return to Austen’s key characters is an engaging read, but it may take too many liberties for Austen purists.
Posted by Marsha Altman at 4:27 PM No comments:

All this week two different blogs will be alternately hosting a noontime book chat about my novel, which seems to mean you post on the blog starting at noon and after. I'll be popping in when I have something to say, but otherwise people will just be discussing what they thought of the book, so it's a good way to have your say or read someone else's somewhat live reviews.
Posted by Marsha Altman at 8:12 PM No comments: