Gone But Not Forgotten

I'm going away for the next 2 weeks. My father has a dermatology conference on a Baltic cruise ship for some reason and I'm going with him. Which is good, because I really need to get out of the city and the heat.

I was going to do a podcast bringing everyone up-to-date, but I realized that it would just be complaining about a hot, awful summer. Don't get me wrong - sales have been great, and books 5 and 6 are coming along - but my family's gone from emergency to emergency and my iPod weather app always says "feels like 99 degrees" even when it's 80. So I just need to get out of here. No I will not be visiting any sites I mentioned in book 3 - I will be in Russia, but not that deep in Russia - but I would like to see some of mainland Europe, which I have never seen.

Book 5's revision will be out in August. It was delayed by everyone else having a crazy summer, too, and I did get back new edits but didn't have time to implement them because there's a waiting process when you go back and forth with Kindle and Createspace. Looking through the book, my friend only found about 20 typos, which I don't think is as bad as some people made it out to be, but could use improvement.

Book 6 is coming along, but I'm not setting a date on it yet. I''m not doing any work on it on the minute other than looking through common domain images for possible art and color themes. The manuscript itself is at the editor. It will be called Georgiana and the Wolf. There really is no way to work Darcy into the title, which is why I abandoned that publishing convention for The Knights of Derbyshire. The plan is, because book 6 is just so much different from the other books in the series, to just rush on ahead to book 7 which brings us back to more familiar territory (and resolves a major plotline of book 5) and then take a breather before book 8.

For those of you who have read book 7, which used to be known as If I Loved You Less, I am open to title suggestions, because that is an OK fanfic title (it's an Austen quote) but a bad book title.

I'm not putting book 5 on sale while I'm in Europe, but honestly if $4.99 is breaking the bank for you, just read the book online. There will be sales when I get back around my birthday (Aug 28) and a whole length of time before the release of book 6, which won't be out any earlier than November from the looks of it.

My books wil be sold at the Decatur Book Festival over Labor Day Weekend. I won't be there (family event) but there'll be signed copies of books 1 and the anthology to buy. Sooner or later I'm going to have to stop avoiding cons, but money's a little tight and it's a BIG family event. Also traveling on Shabbat is impossible and I'm kosher so that always makes these things a little more expensive and way more complicated.

I just want to say before I leave that I really appreciate every one of my fans. Hell, I appreciate you even if you bought the book, didn't like it,and posted a nasty review on Amazon. You do what you gotta do. But I definitely wouldn't have the courage (or patience) to self-publish the continuing series without all the support I've received, and I'm grateful for it.
Posted by Marsha Altman at 9:17 PM 2 comments:

Honestly, when am I not running a contest?

Free stuff. That's what this blog is all about.

Contest: Think you've got a good public domain image for Book 6? Submit it via email, comment on this page, or on the Facebook Group Page. Last book, Cherri won this contest with her submission, which ended up being the cover image for Book 5, The Knights of Derbyshire. The winner gets their name in the acknowledgments and a free hard copy of the paperback, which is on schedule to be released late Fall.

Also, it is perpetually too hot outside. That is all.
Posted by Marsha Altman at 4:36 PM 2 comments:

In My Spare Time Since I realize it might be a good idea to actually say something interesting on my blog, I'll take a moment to talk about the iPhone game I'm currently obsessed with, Cause of Death. It's a murder-solving game involving a male and female detective who don't like each other at first because they're prejudiced against people who act differently and they have a lot of pride. So it's basically exactly like playing Pride and Prejudice, if Pride and Prejudice was about catching serial killers in America and also not like Pride and Prejudice at all.

But I'm sure learning a lot about San Francisco!

Posted by Marsha Altman at 2:10 PM No comments:

2. Sales! There will be sales this summer on the eBook as I experiment with pricing on Amazon. Maybe $2.99, maybe .99c, but keep your eyes peeled on the Facebook group page. And there will be a big period of sale before the release of book 6 in the Fall.

3. Book 6 will be titled Georgiana and the Wolf, which is its old FFnet title. It's currently at the editor's. Then it goes to the copyeditor's, then to layout, so some months are involved here, but I will try to get it out this Fall. It is the only book where I am doing a sort-of major revision to one of the plotlines in the books versus versions you will find online. 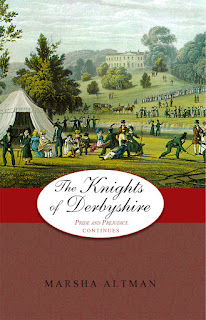 4. A couple questions people may have about book 5:
- Yes, it is self-published, which is why I can alter the contents of the book or change the price. I cannot do this with the first four books.
- I cannot bring the price of the paperback way down because it costs money to print and I cannot sell it at a loss.
- The eBook is distributed on non-Amazon sites by Smashwords, which takes several weeks to update, which is why I cannot fluctuate the price on other sites as I can on Amazon and Smashwords
- In case you were wondering, yes book 5 does weigh more than the other books because the paper quality required for digital printing is much higher and therefore heavier. I spoke to the rep at Createspace and she they cannot make the book lighter. It's not a brick or anything, but someone like me who mails people copies on occasion, those ounces make a difference.
- Yes, Mugin does appear in a later books, in which form I will not yet reveal.

5. Jesus, it is really hot outside. That is all.
Posted by Marsha Altman at 4:10 PM No comments: