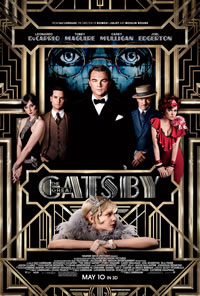 First If you have 6 hours left in your life, download and listen to the audiobook of The Great Gatsby. Second, if you don't have 6 hours left your life, G-dspeed and stop wasting time with this blog. But for the rest of us, I recommend avoiding the Jake Gyllenhaal read (the guy who sounds and looks like Tobey Maguire, who's actually in the movie, but isn't the same guy to confuse you) and trying the Frank Muller version so commonly floating around on torrent sites. It is a great read but I enjoyed it more in audio form, something that is rarely true for me when it comes to books.

Then I recommend trying the most recent movie, partially because the other versions were lousy (particularly the Robert Redford one) and partially because it is awesome. I enjoyed Baz Lurmann's choice of directorial style, the one known as 'totally insane.'

"One of the greatest books in the English language and set in the 1920's? Let's make sure the movie is in 3D and feature as many modern rap stars as possible! Some of the scenes won't even be in focus! It'll be great!" And thank G-d no one stopped this asylum patient who is somehow allowed to direct movies.

The Great Gatsby is a book about excess and wild parties, or the first half is, and it really works for the first half, except maybe the first 10 minutes of the movie where the camera speed is turned up to "meth addict" and I'm serious when I say some important shots aren't even in focus. It's really disorientating and makes you grateful when people are just standing around and talking instead of trying to go places, but it also speeds up the duller moments that need to be in there, such as that critical first scene at Tom and Daisy's that establishes the tone for the book but is agonizingly slow. Things only get better with the scene at Myrtle's apartment (or her sister's, I was never clear on that), one of the slowest moments in the book where bored rich people say boring, dumb things and none of them involve Gatsby. Worst orgy scene ever for reasons not involving the technicalities of an orgy, and I've read Mr. Darcy's Diary (Sorry Maya. Thanks for making that scene short). In the movie it's a great amount of fun that you feel like you're having and Nick actually gets off some funny lines, which he continues to do in the movie in a way that doesn't pop out so much in the book because you're not staring at Tobey Maguire's confused expression.

Then Gatsby finally shows up in the fantastic set of a party just as glamorous as you were hoping and movie continues full tilt but with less confusing tracking shots as it builds up the relationship between Nick and Gatsby, which is harder to see in the book because Nick is the narrator looking back on the past and making harsh judgments and the movie he's more obviously a character. The sweetest scene in the movie is when Nick agrees to host the tea party with Daisy. Gatsby rushes to essentially reward him with free money via business connections, and Nick just says he'll do it as a favor, because he wants to, and Gatsby is shocked. I never noticed it in the book.

And then awful, awful Daisy, played very well by Carey (her husband is even better), and the movie slows down as the book does. But Baz Lurmann somehow made the scene of Daisy crying into a pink shirt not ridiculous, which was a masterpiece of directing as far as I am concerned. If the was an Academy Award for not fucking up an awful scene from a book, he would win it. He would win ten of them. He would get nominated a bunch of times and then win a bunch of times. Getting that scene right means you win Great Gatsby.

The reason I was so impressed involves my high school encounter with the book. One day our teacher let us watch part of the 1972 movie with Robert Redford and Mia Farrow, which she explained was a total flop. "And this is the most ridiculous scene! Everyone just laughed and laughed! Killed the whole movie." And Mia's crying into this pink shirt and it's just awful and we all agreed with her.

The rest of the movie is a little dull, and at times still a little too over-the-top to be achingly sad, though there's one brief moment where I forgot that this book was a cautionary tale and begged that maybe this version wouldn't work out that way, and they would actually end up together. (Spoiler: they don't) I'm not a huge fan of DiCaprio, but he really sold me on Gatsby not just as an obsessive weirdo - which, to be fair, he is - but as a guy totally lost in his dream. Also bravo to whomever was in charge of making sure the actors had red eyes as if they'd just been crying or were going to cry, which had to be a good 40% of the movie. At some point even Tom looked like he at least had allergies or something.


In the end I obviously recommend this poignant, well-acted, incessantly well-crafted movie that makes the best of narration to capture the literary genius of Fitzgerald's descriptions. And the book has perhaps one of the best final lines of all time (even if it has a confusing run-on sentence), and it's also in the movie:

"Gatsby believed in the green light, the orgastic future that year by year recedes before us. It eluded us then, but that’s no matter — to-morrow we will run faster, stretch out our arms farther. . . . And one fine morning —— So we beat on, boats against the current, borne back ceaselessly into the past."

You can even listen to it:

Up next: Hopefully I get back to talking about my upcoming book, which does not involve the facade of the American dream and instead involves British people trying to marry each other.
Posted by Marsha Altman at 2:11 AM No comments:

Gatsby vs. Darcy: An Unwinnable War

I had a long drive over the weekend and spent seven hours listening to the audio version of The Great Gatsby (the Frank Muller version), a book I hadn't read/heard since high school. I do recommend the audio version because when the book gets a little dull and you space out, the book continues as if you've continued reading! It may be one of the best English-novels ever written but there certainly are a lot of places to space out.

Had you asked me to describe it prior to the weekend, I would have said based on fuzzy memories, "There's a narrator living in a house next to a rich guy named Gatsby who is in love with a married woman and her husband is a jerk. Then I think there's a car accident and someone probably dies off-screen and the novel's over." Which is mostly accurate. As Kate Beaton pointed out in her book Hark! A Vagrant, it's a great novel for high school kids to read because it's basically a primer on how to find metaphors in books but it doesn't have many likable characters to relate to.

Compare this to the beloved but mostly metaphor-less Pride and Prejudice, which seem so to be its opposite in many respects. Both are about rich people trying to get married to the right people but mostly spending lots of time hanging out because they don't have anything else to do. When I first read Pride and Prejudice (also in high school) I found the first half mind-splittingly boring. It wasn't until Elizabeth got her explanation letters from Darcy that I suddenly realized I was reading a truly great book. In Pride and Prejudice you're agonizing over every moment of Elizabeth and Darcy's romance; in The Great Gatsby you're trying to determine what Fitzgerald is trying to say about G-d via the eyes of T.J Eckleberg's discarded advertisement in the valley of ashes. Darcy gets the girl, and Gatsby doesn't, mostly because he doesn't have the right kind of money ("old money"), another issue that is a focal point of Pride and Prejudice - inherited vs. landed money.

I could go on about this, but I'm not writing a paper for an English class. I will say that I recommend the audiobook version and taking another swing at the novel, whose beautiful words don't really translate to screen.

In other news, Book 7 (Young Mr. Darcy Falls in Love) has gone to copy-editing, so we're looking at a July release. It's a longer book than Book 6, and set safely back in England, where young people are again trying to pair up. There's going to be a lot of contests and giveaways and sales on the older books when we get nearer, so keep watching this space.
Posted by Marsha Altman at 3:57 PM No comments: