Georgiana and the Wolf Now Available! 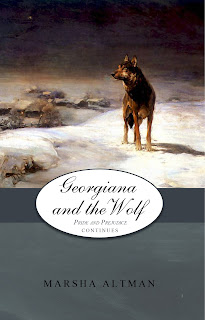 Georgiana and the Wolf, the sixth book in the series, is now available.

Buy it in paperback.
Buy it for Kindle.
Buy it in all other eBook formats.
It should soon be available at Kobos and B&N.com if it is not already.

Description
A mystery unravels unravels in a rural town in France...

INSPECTOR ROBERT AUDLEY, rising star of the Parisian police force, is called to rural France and the estate of the Marquis de Maret to solve a murder. If his job wasn't hard enough with little evidence and few leads, suspicions point to a creature neither man nor wolf, but something in between.

As rumors of vigilantes and monsters fill the countryside, Audley investigates the connection between the Marquis and the local seminary, a finishing school for proper English women. The Marquis's betrothed, Lady Heather Littlefield, and her best friend and companion Georgiana Bingley seem somehow involved. Are they the next targets of the murderer? Or are much more mysterious forces at work?

In Altman's fifth installment of the The Darcys and the Bingleys, she continues Jane Austen's Pride and Prejudice through the character of Georgiana Bingley, daughter of Charles and Jane Bingley of Chatton and Derbyshire, during her eventful and possibly disastrous year at the Robinson School for Women.

Enjoy! And please, please take the time to review it on Amazon if you have a chance.
Posted by Marsha Altman at 7:48 PM