I want to thank everyone who bought a free copy of The Knights of Derbyshire during the Kindle sale and raised the ranking. All told I gave away about 2000 copies, which I would not view as losses at all given the free Kindle book market and the fact that this is a series of books to buy.

Things I Learned This Month:
1. That copy-editing can never be good enough. Georgiana and the Wolf went through every possible check before it could be published and there's still a major typo in the print edition that will be changed in January. No one else has found it yet except the person who pointed it out to me - my mom - so I can't blame myself or my three levels of editors too much. Actually, there's still a contest going that the first person to find it gets a free copy of the revision. So that's impressive in its own way.

2. That I think the Amazon market is nuts and may be crashing. Maybe letting everyone throw their S&M werewolf Celtic historical fiction for 99c wasn't a good idea, but even Amazon can make mistakes. And I can't complain too much, having joined the ranks of self-published Createspace authors. Book 6 isn't doing as well as Book 5. To some extent I expect that, given that in a series there's going to be diminishing returns with each book outselling the next one as readers drop off or don't find the new ones, but I would feel better if it was doing well. Since it's been hard to find reviewers with a book so late in a series, I can't say people aren't buying it because of bad reviews. I think the market is just flushed with JAFF, and I don't have a massive publishing house's publicity machine behind me, so that's that. Also, weird fact: Book 3 has always outsold Book 2. I don't know why. 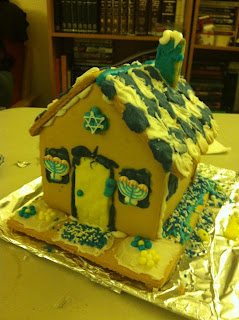 3. That they now make kosher Hannukah Houses so Jews don't feel left out of the Gingerbread House phenomenon.  This is true. The main reason for my never building a Gingerbread house is that the sets are never marked kosher and contain unkosher frosting or candies, but one Jewish company put an end to that. The result: A stale vanilla cookie of a house. The frosting was good though.

4. That I can still surprise myself with my writing. I sold a horror short story to Dybbuk Press for an anthology, details upcoming but unrelated to Jane Austen. The surprise isn't the horror part (I've always written sci-fi/fantasy) but the short story part.

5. That Tibetan thangka painting will always test my endurance but still be worth it. I've gotten pretty good at painting and drawing clouds and pretty much nothing else.

You've never seemed to be a really dedicated blogger, but your just so honest about it! Sorry to 'hear sales are down, perhaps your correct and JAFF has kind of run it's course for the most part. For purely selfish reasons I hope your able to finish out your series. I really enjoy the series and hate it when things are left undone. Hopefully sales will pick up. Interesting about the kosher gingerbread house :•)

I don't mind writing when I have something to say or sort of an open ground to say anything I want, but neither is the case in an author blog. I have to post regularly and it has to be fairly on-topic for anyone to bother reading it, or I fail as an author forever in 21st century publishing apparently. So that's why the blog is here. If I could say really negative things anonymously, or talk about my personal life in a way that isn't off-putting to readers who don't know me at all and I would somehow want them to know, I would post a lot more. Otherwise, I refuse to fill the internet with more junk than is already there.

Please let us know what the major error is after the contest so I might kick myself!