And to All, a Good Night

Thanksgiving is my mother's favorite holiday. I could actually take it or leave it, but it is nice in that it's not a Jewish holiday, as the Jewish holidays come with all kinds of ritual obligations and restrictions, and it's an American holiday that's secular enough for even religious Jews to take part it in. Some Jews don't celebrate Halloween, which just sucks for them, as Halloween is my favorite holiday. When I was very young I went to an Orthodox day school where everyone was more religious than me, and I was disappointed that there were no Halloween decorations like in public schools, so I had to take comfort at the skeleton over the letter"S" in our letter chart and consider it my own decoration. But even Orthodox schools, which didn't necessarily take off for Christmas (a lot of yeshivas take a week off in January), took off for Thanksgiving because the kids' parents would be off from work so it made sense. I grew up with a mix of secular and religious culture that I'm very proud of.

Thanksgiving is about watching the parade and eating turkey. Also it's about judging how bored Santa looks when he shows up at 11:58 in front of Macy's. The last couple years have been good but it can vary. He's been on that float I don't know, at least four hours, and it's often drizzling or snowing. And he can't look NOT jolly for any part of it, unlike the rest of the people on the floats. So think about that when you're watching the parade, WHICH YOU SHOULD BE.

Georgiana in the Wolf, in more pertinent news, should be out the second week of December, hopefully before that. Amazon's Createspace is sending a proof on Monday, which will no doubt have some problems, but if there aren't too many problems the second proof won't take long. I was shooting for December 1st but there's always unexpected delays, like your second copyeditor is out doing Hurricane Sandy relief and your graphic designer needs a new computer. Watch this place for giveaways. The Knights of Derbyshire made it into Kindle Select so it will be free for 5 days in December.

Happy Thanksgiving!
Posted by Marsha Altman at 2:00 PM No comments: 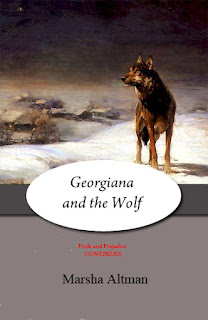 First, let me just say I'm fine. I live in Upper Manhattan, so I never lost power during the Hurricane. My brother was without power for a week and the same with my parents in New Jersey, and everyone is safe and healthy and there was no major damage to the house. Things are still a little tense here in NYC, with a gas shortage and crowded subways, but we made out a lot better than other people who are now homeless.

If you're looking to donate, I heavily suggest check out the AidMatrix website and choose a local charity that will be more efficient with your money than the Red Cross. If you want my person suggestion in terms of work I've actually seen happening on the ground, a great place to check out is the UJA, which is currently providing non-denominational services to all boroughs.

Anyway... Big news! Book 6 - Georgiana and the Wolf - is back from the copy-editor's. I'm just doing some last-minute checks and waiting for the cover designer to get back to me with a final cover and then I begin the proof process at Createspace. In other words, the book is on schedule to be out in December, hopefully very early December.

When book 6 is released, look for discounts on Book 5 (The Knights of Derbyshire). It's the only other book in the series whose price I can control, and I'm going to bring down to .99c a lot to push sales. It may even be free for a few days.

Book 7 has gone to the editor's, where I expect to be for a while. We're shooting for a Spring release and then a Fall release in 2013 for Book 8. Book 7 doesn't have a title yet.

The best way to get all these updates is join my Facebook Group Page, which is the page I update most often.

In unrelated news, I did a podcast about some of my earlier writing, the Bucky O'Hare Web Series. You can listen to me rant about season 2, which I worked on from 1998-199, here.

Posted by Marsha Altman at 12:07 AM No comments: