1 paperback copy of The Darcys and the Bingleys goes to: Liz Josette

1 paperback copy of The Road to Pemberley goes to: Cherri Trotter

1 digital copy of Georgiana and the Wolf goes to: Geenzbeenz

1 paperback copy of Georgiana and the Wolf goes to: BeckyC

You all should have emails from me. If not, email me and let me know! And congratulations!
Posted by Marsha Altman at 8:31 PM 2 comments:

And you should probably enter those contests, too 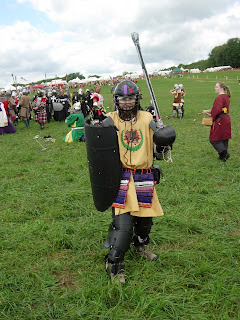 I spent last week at the 42nd Pennsic War. For those of you not aware of what Pennsic is, it's kind of hard to explain. A Ren Faire that's not open to the public and lasts two weeks? Yes. An excuse for heavily-armored people to beat each other with wooden sticks? Yes. A medieval reenactment of anything? No.

Pennsic is the annual war between the East Kingdom (the East Coast of the US) and Mid-Realm (everything West of Pittsburgh) staged by the SCA, or the Society for Creative Anachronism, which sort of involves roleplaying everything from the Fall of Rome to the reign of Elizabeth I. So there's a lot of guys dressed like Celts and Romans and Tudors and Samurai running around, buying cool handicrafts from each other and participating in massive battles of a thousand or so people that are determined by who gets hit the most. The war isn't really about winning so much as having an excuse to get together (It's said, the loser gets Pittsburgh).

It's also the ever time I will ever call myself a jock. Not because I'm particularly built or particularly good at fighting (I'm actually pretty bad) but because I go there mainly to suit up in armor and fight, and not do a whole lot of the other stuff like bardic circles and learning crafts and archery and whatever else is going on. Maybe some drinking, because there are really interesting forms of liquor there. Pennsic is the kind of place where you can walk around the campground at 10 in the morning with an empty goblet and someone will fill it with homemade mead that is really heavy on the honey.

I'm not going to get into the technicalities, but despite living in New York, which is in the East Kingdom, I was part of Drachenwald, the European/Middle Eastern/African kingdom, representing the Israeli shire of Ma'ale Giborim because spiritually, I live in Israel, and the only reason I don't physically live there is that I get really sick from the water.

I had a lot of fun this year, managing to fight two days in a row (which in armor can be really hard). I have no idea who won - probably Mid-Realm because they had far more people on their side. But that's not really the point of it. The point of it is to get bashed on the head a couple times and say, "Wow, my helmet sure works! Totally worth the money!" 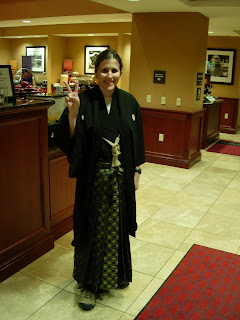 So long, Pennsic. See you next year!


If you want to enter last month's contests, you have a week to do so! Leave a comment on the blog post of your choice. And remember to leave your email so I can contact you if you win!
Posted by Marsha Altman at 1:20 PM 1 comment: