...for me, anyway.
New Review at Austenprose
Interview and Giveaway at My Jane Austen Book Club 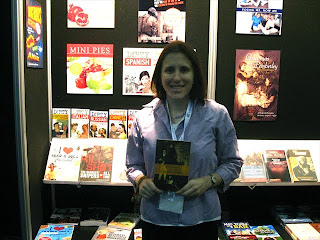 Last week I attended the Book Expo of America, which is at the Javitz Center in NYC, and met with my editors at Ulysses Press, who fly in from California for the event. It's the largest, most
important gathering of the publishing industry in the world, though it has some good competition with the Frankfurt Book Fair and the London Book Fair. Anyway, Keith at Ulysses said that sales of book 4 were looking good and I should send in book 5, which I did. Ulysses has right of first refusal, a standard in publishing contracts that means that they have first crack at deciding whether or not to buy the next book I decide to publish. Technically the contract says they only get 30 days to decide, but that's not something we sweat over. So keep buying, guys, and hopefully there'll be a book 5 out next year!
As for the eReader editions, they should be available on all formats. If you find a format it's not available on, email me or leave a comment here and I will contact Keith. I know as of the BEA it wasn't available on Nook, but he said they would get that straightened out as soon as possible.
Otherwise things have actually been going slowly outside of work (at my part-time job and promoting book 4) due to some weird, prolonged sore throat. I have gotten a lot of Lovecraft done, as I'm currently going through his entire collection of writing, because a lot of it is available on audio book and I've been listening to it in bed. If you're going to listen to Lovecraft, do it on audio book. Trust me, it's worth it.
Posted by Marsha Altman at 2:21 PM No comments:

It's been a busy week, and I'm camping this weekend, so this post was written on Wednesday. Some things may have occurred since then.
New Book Review 1
New Book Review 2 and Giveaway
Book Launch Post at Austen Authors and Giveaway
Book Launch Selection from Chapter 3
The Ballad of Gregoire Darcy is now available on Kindle (and presumably other formats), which is earlier than expected.
I am still finishing this short story that is taking me forever. Up this week: The Book Expo of America, where I will get to chat with my editors at Ulysses Press who are flying in for it. It's at the Javitz Center in NYC, and if you're planning on being there and want to meet up for some reason, let me know.
Posted by Marsha Altman at 3:00 PM No comments:

This post was done under the influence of multiple allergy drugs

There’s a new review up on Amazon and Goodreads. I remember this blogger as someone who didn’t get the first couple books because the publisher didn’t ship to Finland, or something like that, so I’m glad she got the fourth book. The other reviews are presumably coming, but usually review bloggers need a month lead time and I think they only got about a week before publication.

I, meanwhile, am bogged down completely in this short story about Mugin and Georgie that I want to release to coincide with book 4. I remember it being an interesting idea six months ago, when I thought of it, but now I am totally uninspired. The other two stories for the mini-collection are very short, so this one should be at least 20,000 words in my opinion. Writing at full speed, I can write 3000 words a day and have it done in a week, but I’m just not writing at full speed. I spent most of last week in an allergenic haze, either drained by allergies themselves or unable to focus thanks to my Allegra/Veramyst/Actifed/Benadryl combo. I spent most of it playing old Super Nintendo games with an emulator. In good news, I finally beat Super Mario World! This is a huge milestone for me, because I as a kid I had to get a babysitter to beat it so I could see the ending.

Now I’m writing again, but not at the speed of light. I’m camping next weekend, and the following week is the Book Expo of America, where I will be there as a Ulysses/Sourcebooks/Harlequin Teen author (my badge says Ulysses), generally seeing what else is being published, picking up some free books, paying too much for a bottle of water ($3.75! Curse you Javitz Center!), and chatting with my editors. So I have that. Hopefully I will have the short story done by the end of the month, and then Brandy needs some time to edit it, and then I can release it in June to coincide with the release of the Kindle version of book 4.
Posted by Marsha Altman at 4:21 PM No comments:

My book came out this week! So it was a bit crazy, though in a very distant manner, as there were no parties or book signings. I didn't even get a copy of the book; I had to buy one at the store because I was getting impatient. Author copies are coming, but probably not for awhile, because sending the author their copies can be understandably low on the list of things for the publisher to do at launch.
This week:
My monthly post at Austen Authors
The first review at Song and Stories
The first author interview and book giveaway at Song and Stories
Up next: Hopefully, more reviews will come in as reviewers receive their copies and read them, and the release of the eBook on various formats later this month/early June.
Posted by Marsha Altman at 5:21 PM No comments:

I don't know why I named this post the slog. Don't put me in the corner about late things done with a headache.
The book publication date is today! Amazon is being really inconsistent about whether they have the book and are going to ship it (it's probably in the next day or so) and I haven't looked in any stores yet, so the only people who seem to have it are reviewers. I have no idea when my author copies are coming, as that's generally the last thing the publisher gets around to because it's the least important at launch, so I'll end up buying a bunch or mooching a couple copies off my parents until I get mine. Buying your own book in a store is always a weird experience - you make the cash register guy green with jealousy and no, you do not get a discount (I would rather have the discount).
To prepare for writing this short story I'm going to put up digitally to coincide with the book, I've read a whole bunch of books on London and I'm probably going to read a whole bunch more to continue putting it off even though I either know everything I need to know or I'll be finding it online. I'm currently in the middle of Regency Recollections: Captain Gronow's Guide to Life in London and Paris, which is somewhat scattershot and not terribly interesting, but has good footnotes. And I bought it and I'm halfway through it so I'll probably finish it off; I very rarely put a book down wholesale.
There will be giveaways for The Ballad of Gregoire Darcy on Austen Authors and my Facebook fan page; I will alert you on this page when I do that if you're not connected to me in the other two fashions so you can have a chance to win a signed copy of the book.
In other news: My non-fiction proposal for a book of Jewish ethics from the Mishnah for the Chinese-language market went out, so we'll see if a Chinese (probably Taiwanese) publisher bites and gives me money to write it. I'm focusing totally on the short stories for book 4, and after that it's revising Towerland (which is sci-fi) for publication. Or getting totally lost playing Fallout 3 New Vegas. Either one.
Posted by Marsha Altman at 8:54 PM No comments: