Because of the impending release of Book 7 in early July, the Kindle versions of Books 5 and 6 are temporarily on sale for $2.99! Pick them up while you have the chance. 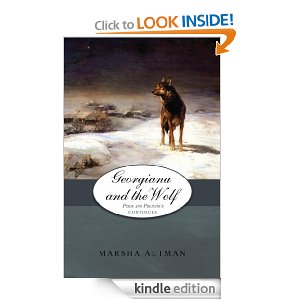 Posted by Marsha Altman at 7:41 PM No comments:

Very few people know how a novel comes together. Not even authors really know unless they self-publish, because the editorial and layout team at the publishing house handles it. That’s why so many self-published novels come out so badly – margins too wide, font too small, no page numbers, overly simple cover. People try to reduce page count to reduce price, which isn’t a good trade-off for the reader. And some people publish on eBook only and don’t worry about it.

I had some experience with this when I self-published Pemberley Shades as a POD (print on demand) back in 2008. I was trying to copy the layout of the 1949 edition to be loyal to the text, right down to the number of pages and the centering of the page numbers. But I had to guess at the font.

I’ve now done it eight times, and it remains tedious. When it comes back from the copy-editor, I review all the changes and upload it to Createspace, where they reformat it to my chosen trim size (which is very common but not preferred by their printer). Then it’s time to go in and chose the font, number the pages, and choose things like whether the chapters should have capital names and whether the count should start on page 2 and whether to number the introduction. Every single thing you see on the page is the result of a careful decision – or unfortunately, a not-so-careful decision, which is why I keep changing fonts between editions. Arial for Book 5 was a bad idea, but I didn’t know anything. Book 6 I used the recommended Garamond, but it turned out I had a weird edition of Garamond and that’s why it looks strange. Book 7 is in Minion Pro or something like that, or I hope it will be but it involves a lot of formatting issues with Createspace.

Boring, right? But it takes hours and hours and it’s something I have to do, always forgetting how long it actually takes until it’s 4 am and I’m still doing it and ON G-D IT GOES ON AND ON.

Book 7 (Young Mr. Darcy in Love) is almost done. We’re shooting for a July 1st release, but it may be a bit later than that if Amazon holds it up with processing. It will be available on all eReader formats from Smashwords. If you would like a review copy, contact me. If you would like a print copy, you are eligible for one if you have reviewed at least five of my other books on Amazon. They don’t have to be long and they should be honest reviews, but it costs me money to send out print copies so I need some reliability.

Also coming up with July: Lots of giveaways and sales on my older books! So stick around. There’s lots more coming up.
Posted by Marsha Altman at 6:25 PM 2 comments: 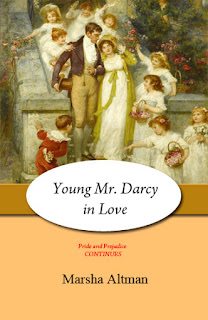 Business first: The cover of book 7 is mostly decided, but I haven't officially sent it to my graphic artist who perfects the work because I don't have a page count yet, so you're welcome to comment on it. For more regular updates, you should really be visiting my Facebook Group Page, which is where all the action is. We're aiming for a July 1st release - in that range, anyway - with the eBook probably out a week ahead of the paperback because of the various waits in the approval process at Createspace. There are some big sales coming up - details to come - and contests around the release of the book, so stay tuned.

In addition to books 8-10 rolling out over the next two years, I'll also be working on a companion guide to the series, which lists all the dates and characters and historical background and discusses how the books generally came together. There's also short pieces and scenes that were left out of the print versions. After that ... well, I imagine, a rocking party in NYC where I celebrate never having to do anything Austen-related again.

In other news, I spent Thursday of last week at the Book Expo of America, publishing's trade show, where I was admitted as the assistant to my boss, a literary agent. They do technically allow self-published authors there but they don't WANT them there, and people with that on their badges generally get ignored. This is a trade show where editors and marketing people and book buyers and librarians have a chance to meet and do business and big publishers work up excitement about their new books. In BEA tradition, I was almost handed a ton of giveaway books I did not want because I would not read, and in the past few years I've perfected the art of not walking out with twenty of them.

It was also a time for attending panels where important people who think they have their finger on the pulse of their readers and a lot of charts and sales numbers to prove it say incredibly backward things about new technology and emerging markets. For example, there's publishers who are actually concerned about pirating and use expensive DRM (digital rights management) software to try to prevent it, which has never ever ever worked in the history of DRM. You could sink time and expense on hiring experts to protect you, or you could just go out into the woods and throw dollar bills into the biggest pit you can find. They will have the same result.


Also in the panel someone said public libraries were the future of publishing, and people clapped because they were librarians and they don't want to be out of a job. But if libraries switch over to eBooks for their non-research materials, no one will go to them, and they won't need staffs. Or a building. I think this was lost on some people.

The main thing that occurred to me this year more than other years is the particular way in which the publishing business model is a bad model, and it only gets away with it because people agree to work there for far less money than other industries and there still is a certain worship of books, which is good. But their business model is super, super bad.

Anyone in business knows two basic things: (1) you have to produce a product people will want to buy, either because they actually need it or they think they need it, and (2) you have to sell that product at a price your customers can afford (only Apple is exempt from this). If I had a business selling backyard saunas, and twenty people came in each day and 19 of those people said they would love to buy my sauna but couldn't begin to afford it, I would have to seriously rethink my pricing to stay in business. Especially if the guy next door was selling perfectly usable, well-scrubbed, refurbished saunas for 70% off. Then I would be in real trouble.

In publishing, the company decides what books will be sold largely on guesswork, then decide on a price through a set of factors that are complex and can't possibly be seen by the average consumer, who probably just thinks that hard cover books cost too damn much. I for one have a reading habit well beyond my ability to pay, and when you consider I would have to pay $10 per book to take it out of the library (subway both ways to get it and then to return it), the only way to satisfy my needs it to find books on the used market, where I usually go for the cheapest possible price (or next-to-cheapest, if the cheapest one is in really bad shape to the point of being unreadable). I pick up books on street stands, in Salvation army stores, at flea markets, and from Amazon's used book shop. This is a blind spot for publishers because they have no reason to track non-sales (they make no money off a resale). And I can't be the only one doing this. Book costs decrease because they're resold; the only time I ever buy a new book is after Amazon marks it down or I have a coupon and I have also ruled out finding it cheap on the used market.

In other words, most books are too pricey for me. We're taking into account the fact that I'm poor, yes, but if people want to be reading as many books as I'm reading per year, or anything close to that, and they don't want to spend time and money going to the library only to find out they have to wait for the popular book to become available again, they're going to go used.

Indian book publishing has a different model. They price books based on how much the literate market can afford to pay for them. Even books that are imported for sale from abroad can prove to be too expensive so they reprint them in India, where paper is cheaper, at a drastically lowered price. This meets the demands of India's flourishing literary culture that they inherited from the British (or the English-language part did), which increases as more people become literate. So if they can meet the demands of the market, why can't the industry in America? If people are going out of their way to buy cheap e-editions or used books with damage to avoid high prices, it means prices are too high.

To be fair these recommendations would be hard to implement. Amazon can afford deep discounts because it sells its books at a loss, making up the money with high end electronics. It does this because it wants to dominate the market, which has worked out pretty well for them. But books shouldn't be a luxury item. Publishers have to face the idea that people are buying books cheaper because that's the real selling price the market can bare, not the ever-increasing prices set at a time of higher economic prosperity. And no amount of blogs and Facebook pages and Pinterest accounts and Twitter accounts and Goodreads author pages that they beg authors to throw up are going to change that.
Posted by Marsha Altman at 11:19 PM 1 comment: